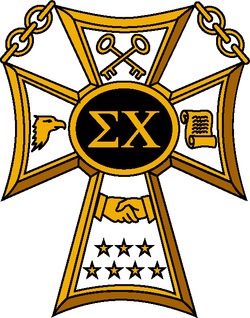 Sigma Chi was founded on June 28, 1855 by 7 men at Miami University in Oxford, Ohio.  Over the years Sigma Chi has grown to become one of the oldest and largest fraternities in the world with 237 active chapters and nearly 300,000 members.  Through philanthropic events Sigma Chi supports the Huntsman Cancer Institute and Children’s Miracle Network.  The purpose of Sigma Chi is to promote the concepts of Friendship, Justice, and Learning.  It also seeks to build brotherhood and life long membership among members.  Sigma Chi’s initial goal is to develop values-based leaders committed to the betterment of character, campus, and community.

The Sigma Chi Fraternity was founded on three main principles : Friendship, Justice and Learning.  These principles are practiced everyday in more than 300,000 living brothers worldwide.  The fraternity was started in 1855 at the University of Miami (Ohio) by seven very noble and well-respected men, who later on became leaders in the church, the court and on the battlefield.  Since its founding, Sigma Chi has overcome many great obstacles but has managed to spread itself across North America with 240 active chapters in the United States and Canada, as well as 145 alumni chapters around the world.