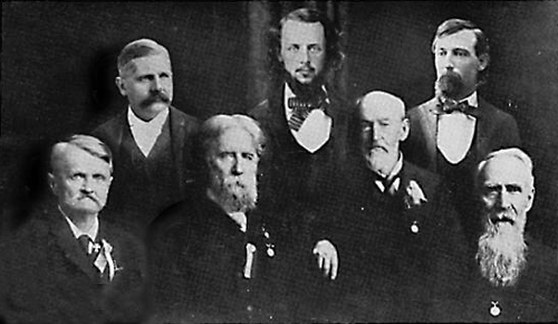 In the fall of 1854 a disagreement arose in Kappa Chapter of Delta Kappa Epsilon at Miami University, Oxford, Ohio. This chapter consisted of 12 men. Six of them, led by Whitelaw Reid, supported one of the members for Poet in the Erodelphian Literary Society. Four of the other six members, James Parks Caldwell, Isaac M. Jordan, Benjamin Piatt Runkle, and Franklin Howard Scobey, refused to vote for the brother because they know him to lack poetic abilities. They favored another man for that office that who was not a Deke. Thomas Cowan Bell and Daniel William Cooper were not members of Erodelphian, but their relation to the disagreement was unqualified endorsement of the four. Thus they became six.
The Chapter of 12 was evenly divided in a difference of opinion that ordinarily would have been decided one way or the other and immediately forgotten. But both sides considered it a matter of principle, and could not reach a compromise. During the ensuing months the groups disagreed so much that their friendship grew distant.

Chapter meetings, or attempted chapter meetings, occurred for months with the breach constantly widening. A dramatic dinner meeting at a restaurant in Oxford in February 1855 involving the dissenting groups set the stage for Sigma Chi's founding. Bell, Caldwell, Cooper, Jordan, Runkle, and Scobey hosted the event, hoping to mend the ways with the other six. They were on hand early, awaiting developments with anticipation. Of the meeting, Founder Benjamin Piatt Runkle recalled, "With the kindest of intentions, we determined to give a dinner in their honor. I remember that the feast was prepared at the village restaurant, the guests invited, and on the appointed night we gathered and waited for the guests. They did not come for a long time, and then only Mr. Reid and with him a stranger. He took into his confidence Minor Millikin (an alumnus of the fraternity from nearby Hamilton, Ohio) and the two decided on strenuous proceedings."

Millikin lost no time: "My name is Minor Millikin; I live in Hamilton. I am a man of few words." He then passed judgment on all of the matters in dispute. Since he had heard only one side of the story, his verdict was against Runkle, Scobey, and the others who had originally opposed election of the Deke as the Poet in the literary society. Millikin found them guilty.

Next, Millikin unfolded a plan he and Reid had concocted by which "justice" could be satisfied with the formal expulsion of the leaders in the rebellion (undoubtedly Runkle and Scobey), after which the others, having been properly chastised, could remain in the chapter.

At this dramatic moment Runkle stepped forward, pulled off his DKE pin, tossed it upon the table and said, "I didn't join this fraternity to be anyone's tool. And that, sir," addressing Millikin, "is my answer!" Runkle stalked out of the room, and his five colleagues followed.

The final meeting of the 12 active members of Delta Kappa Epsilon was held in Reid's room in the "Old Southeast" building several days later. After a strenuous effort, led by Reid, for the expulsion of the six, with six against six on all vital issues, the meeting broke up in considerable disorder.

A rather prolonged correspondence ensued with the parent chapter of Delta Kappa Epsilon at Yale, resulting in the "Bull of Excommunication" in April of 1855, expelling Bell, Caldwell, Cooper, Jordan, Runkle, and Scobey. It was at this time they began making plans to found their own fraternity.

One of the best moves these six ever made was to associate with themselves William Lewis Lockwood. He had entered Miami early in 1855 but had not joined a fraternity. He was the "businessman" of the group and possessed a remarkable organizing ability. More than any other Founder, he was responsible for setting up the general plan of the Fraternity, much of which endures to this day.

During the later months of the 1854-1855 college year, Runkle and Caldwell lived in a second floor back room of a building at the southeast corner of the public
square on the north side of High Street in what is known as the birthplace of Sigma Chi (or Sigma Phi, as it was originally called). In this room were held many of the earlier organizational meetings of Sigma Chi, and it was there that Runkle and Lockwood designed the badge. The White Cross was designed exactly as we know it today except for the letters Sigma Phi in the black center which were changed to Sigma Chi.

Having been members of Delta Kappa Epsilon, six of the Founders were familiar with the general outline of fraternity constitution and ritual content. They were considerably influenced by Founder Lockwood, who had known little of Delta Kappa Epsilon or its differences. With all of their plans formally completed, the seven Founders of the new Fraternity announced its establishment by wearing their badges for the first time in public on Commencement Day at Miami University, June 28, 1855.